Nintendo Switch EMF Radiation – Everything You Should Know 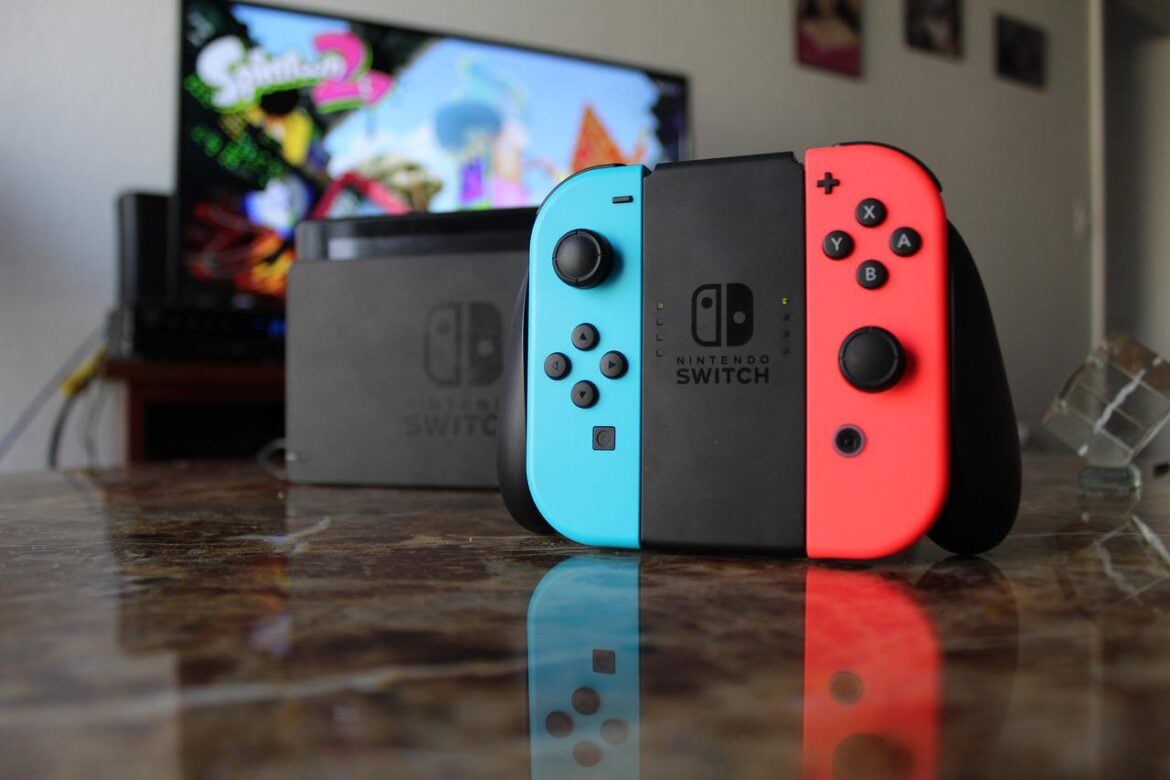 These days, our children are picking up game consoles younger and younger, and using them more and more often. Screens have become completely ubiquitous in our modern lives.

Now, there are certainly some advantages to this such as connectivity, entertainment, and even productivity in some ways. However, along with these pros, are a lot of cons.

I won’t dive into why spending excessive time in front of a screen isn’t good for you, other than to talk about what we’re here to talk about, and that is EMF radiation from devices like game consoles, specifically, the Nintendo Switch.

We’ll talk about all three of these down below, why they are important, and how you can measure them yourself.

Even Nintendo as a company says directly on their website that their devices emit radio frequency radiation and that there are potentiall adverse effects from this exposure.

Nintendo Switch Console: This device should be operated with a minimum distance of 5 mm between the device and your body.

The available scientific evidence does not show that any health problems are associated with using low power wireless devices. There is no proof, however, that these low power wireless devices are absolutely safe. Low power wireless devices emit low levels of radio frequency energy (RF) in the microwave range while being used. Whereas high levels of RF can produce health effects (by heating tissue), exposure of low-level RF that does not produce heating effects causes no known adverse health effects. Many studies of low-level RF exposures have not found any biological effects. Some studies have suggested that some biological effects might occur, but such findings have not been confirmed by additional research.

Nintendo says something similar about the wireless radiation emitted from the Joycon controllers as well.

However, it isn’t just radio frequency radiation being emitted from the Nintendo switch, all three kinds of EMF radiation are emitted.

We’ll also discuss why the Nintendo Switch emits all three kinds of EMF radiation, how other consoles do the same, and just how much radiation these devices emit. We’ll finish up by talking about what you can do to reduce your exposure to the radiation emitted by a Nintendo Switch or any other device and how you can protect you or your kids.

How Does the Nintendo Switch Emit EMF Radiation?

Like I talked about above, the Nintendo Switch, along with many electronic devices with wireless capabilities, emits three kinds of electromagnetic frequency radiation:

Let’s talk about the components that are emitting this radiation so later on we can better understand the steps we can use to reduce our exposure.

The Nintendo switch connects to the internet via it’s Wi-Fi connection. This WiFi connection is a type of radio frequency radiation.

I’ve written lots of articles on EMF Academy about WiFi radiation, so I won’t go too much into how this works and why it’s harmful, but I will say a few things.

What Is WiFi Radiation?

So really, WiFi radiation is actually just a kind of RF radiation, sometimes also referred to as microwave radiation. This RF radiation is at the far end of the electromagnetic spectrum. Although it is a relatively low energy wave and is technically a form of “non-ionizing radiation,” that does not mean it is not potentially harmful to your health.

For a long time, people tried to purport that non-ionizing radiation was not harmful to your health because it didn’t have enough energy to actually remove a charged particle (ionizing). However, we now know that this kind of radiation, especially with long-term exposure can certainly have adverse health risks. In fact, the world health organization in 2011 classified RF radiation like that emitted from your WiFI router as a Group 2B possible human carcinogen.

Any exposure to Radio Frequency, or WiFi radiation, including that emitted from the Nintendo Switch could have some potentially harmful effects.

Long-term exposure to Radio Frequency waves or microwave radiation has long been studied and shown to produce all sorts of adverse health effects. See my post on EMF Radiation Exposure Symptoms for a full list of common symptoms. Even the American Cancer Society, who in large part will not fully say that EMF radiation causes long-term harm, and instead errs on the side of not enough research, admits on their website, that:

Independent studies have connected EMF radiation from WiFI to a whole host of health issues such as:

Frequent and long-term exposure to WiFi also commonly causes symptoms such as:

Now, if you are able to keep a safe distance from the nintendo switch, you should be able to avoid much of this potentiall harmful radiation. It’s important though to keep this in mind so we can make good decisions.

How Much WiFi (RF) Radiation Does the Nintendo Switch Produce?

If you have a quality EMF meter (like my favorite that you can get on Amazon), you’ll be able to read all three kinds of EMF radiation from your Nintendo Switch. However, in this section I want to specifcally talk about how much radio frequency radiation (sometimes called WiFi or microwave radiation) the Nintendo Switch emits.

Your reading will be largely dependent on what you’re doing with the console at the time, whether you’re downloading a game, whether the device is in airplane mode (talk more about this down below) etc. However, if you checkout the video below, you’ll see that readings can be upwards of 300 mG, which is in the potentially harmful range for exposure levels.

Alright, now that we’ve talked thoroughly about the WiFi radiation from the switch, which is your greatest exposure risk from the device, let’s quickly touch on the other types of radiation that you could be exposed to.

Another source of radiation from the Nintendo Switch is the joy-con controllers themselves.

These connect wirelessly to the console and therefore produce at least some radio frequency radiation.

Whenever you input information into the controllers, such as clicking a button or moving a joystick, that information has to be passed wirelessly to the console, and that wireless transmission emits at least some radio frequency radiation that you will be exposed to.

This will be relatively small compared to the WiFi antenna in the console and the radiation it attracts as we talked about above. However, it will be important for our section on reducing your exposure risks to understand that the controllers still pose a small RF radiation exposure risk.

The Nintendo switch not only produces radio frequency radiation, it also produces an electric field and magnetic field radiation from the electrical components inside the device.

The AC power supply produces both EMF radiation as well as dirty electricity.

The one nice thing about these forms of radiation, compared to RF radiation, is that they do not radiate as far and are not as good at penetrating surfaces. So, although when you’re holding and using the device, various electronic components inside the Nintendo switch will expose you to magnetic and electric field radiation, this is not as great of a concern as the radio frequency radiation.

Alright, now that we’ve talked thoroughly about the radiation sources from the Nintendo Switch, let’s talk about how we can reduce our exposure.

How To Reduce EMF Exposure from Nintendo Switch

It’s important to remember that with just about any device, there is rarely a way to completely eliminate your exposure to the EMF radiation the device emits while still using the device. Keeping distance is always a great general rule, and works for things like TVs and monitors, but for a handheld device like this, we aren’t going to be able to get much distance.

So, here are some other simple ways that you can reduce your exposure and protect the body from the EMF radiation emitted from the Nintendo Switch.

Use a Powerbank Instead of AC Power

This is basically just what it sounds like. It is better to plug the device into a simple power bank (like my favorite one from Amazon) than it is to use the AC (alternating current) power from the power supply, as doing so will just contribute to the dirty electricity in your home.

Obviously, best case if you’re using the console for only a short period of time, the best thing to do is just the internal battery, but once that runs low, you would be better off using a power bank than connecting to the normal power supply while close to the device.

When the Joy-cons are disconnected from the console, they are having to communicate all the inputs via wireless transmission, which will produce more radio frequency radiation (like we talked about above).

Instead, just keep the joy-cons connected to the device whenever it’s possible to do so and you will dramatically reduce your exposure to radiation from the Nintendo Switch.

If you want to use your Nintendo switch as you normally would, without the hassle of some of my above suggestions, and are willing to purchase a product to help, then my recommendation would be the Lifetune Device from Aires Tech. There is no other product on the market with so much research and science backing up its ability to protect the body from harmful EMF radiation than products from Aires Tech.

I won’t go into detail about how it works because I’ve written plenty of articles on it already. But if you’re curious how aires tech products work, watch the video on their homepage to see a live demonstration.

Now that we’ve thoroughly covered whether the Nintendo switch gives off radiation, how it does so, and how you can protect yourself from this radiation, let’s quickly cover a few other related questions.

Do Game Consoles Give Off Radiation

Newer consoles, like the Xbox, Nintendo Switch, Wii, etc. will emit more radiation from their wireless connection to the internet and wireless components, all of which will cause the device to expose you to radio frequency radiation.

Does The Nintendo Switch Cause Headaches?

Headaches have been reported as a side effect of excessive use of the Nintendo Switch. Although it’s possible this could be related to the emission of EMF radiation, it is more likely due to eye strain from looking at the screen for long periods of time.

Whether for EMF protection or protecting your eyes, it’s a good idea to take frequent breaks from looking at screens.

I created and currently manage EMF Academy, one of the premier sources for EMF safety knowledge. I am so passionate about spreading this crucial information. If you need anything, just shoot me an email at [email protected] and I'll do everything I can to help.

WiFi Towers – What They Are and How They Work – Complete Guide

WiFi Towers – What They Are and How...

What You Should Know about Aires Tech

EMF Sensitivity Doctors – What They Are And...

EHS Disease – Do I Have It?

How To Eliminate EMFs In The Bedroom

And this is my family. For the past 6 years or so I’ve put a lot of time into researching EMF Radiation and why it’s so dangerous. I wanted to do what I could to protect myself and my family from this danger. This blog started as a simple way for me to share what I learned with the world. Now it is one of the largest and most trusted sources to learn about EMF radiation.

Let’s Get To Know Eachother

Even if you don't win, you'll be automatically re-entered each month!