Home BlogKnowledge iMac Radiation – Everything You Need To Know
Knowledge

iMac Radiation – Everything You Need To Know

I’ve written several articles on the dangers of EMF radiation from computers here on EMF Academy, but today I want to talk about the unique radiation dangers presented by iMacs. If you take a second and think about the computer options usually presented for people, it is either a laptop, which has its own set of dangers but is not typically as powerful as an iMac, or you have a desktop computer, where the tower is separate from the monitor.

Laptops, PC Towers, and Monitors all present their own EMF radiation dangers. The unique thing about iMac’s is that they pack the worst of all three into one single unit, exposing you to a large amount of radiation at all times.

In this article, I want to dive into the unique dangers presented by iMac’s, including showing the results of my own testing.

iMac Radiation – Why Should I Be Worried?

If you haven’t already had a chance, take a look at some of the other articles here on EMF Academy to get a good sense of how dangerous exposure to EMF radiation can be. The bottom line is, computers tend to emit a large amount of magnetic and radio frequency radiation, which over time can cause all sorts of symptoms including:

On top of that, increased exposure to EMF radiation is now tied to all sorts of long-term health effects, most notably increased cancer risks. These studies are often focused around the radiation emitted from our cellphone, but any source can increase odds.

So there are a few things we need to take into consideration specifically with an iMac. LIke we talked about above, we’re essentially combining the magnetic field radiation from the LCD monitor and logic board, with the radio frequency radiation from the wireless card and Bluetooth antenna.

With most computers, you would not be exposed to this much radiation at such a close range, but because it is an all-in-one unit, we’re getting the worst of both.

Let’s break down each of these and talk about them, as well as look at the results of my own testing.

Ok, so the majority of the magnetic radiation will be coming from the LCD monitor, as well as the logic board underneath.

For perspective about the dangers of magnetic field radiation, the United States Environmental Protection Agency (EPA) recommends you limit your exposure to between .5 mG (milligauss) and 2.5 mG.

These are similar, but a bit lower, than my own finding specifically on the iMac.

Using the Trifield TF2 set to Magnetic Field, I found the following. I tested this on two separate iMac’s, a 2013 and 2015 and here were my own results for magnetic radiation:

As you can see, even at three feet away, you can expect magnetic field radiation levels at the top of what the EPA recommends you expose yourself to.

Many people sit much closer than three feet away from an iMac, and every inch you move closer is increasing the radiation you expose yourself to. 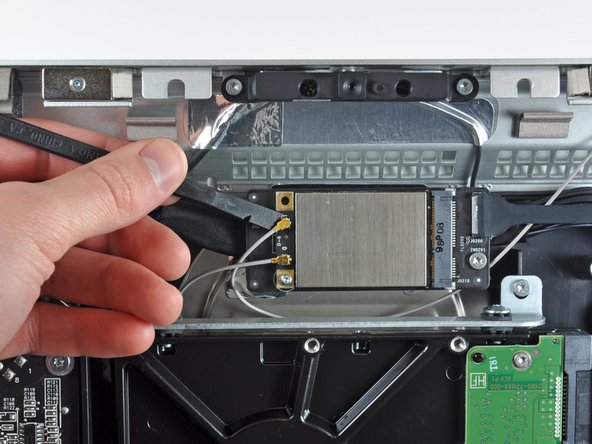 So, in general, the radio frequency radiation you’ll be exposed to from your iMac will be quite a bit less than the magnetic field radiation. The two sources you can expect to emit some, are the airport card (wireless card) which is attached to the logic board, and the Bluetooth antenna.

The Airport card is a small silver rectangle typically located right above the hard drive, and below the camera at the top of your screen. You can see what it looks like in the image on the right.

As this device keeps your computer connected to the WiFi in your home or office, it will transmit and receive radio frequency in the form of packets. These packets are the measurable portion of the radio frequency radiation.

Here are the measurements I got from my Trifield TF2
(Note: remember that whenever you’re measuring radio frequency radiation with an EMF meter, to ignore the primary number and only look at the “peak number.” Since radio frequency is transmitted in packets, the “peak” number is the only one that will give you accurate measurements)

From this information, you can see that if you sit far enough back, the radio frequency radiation falls off almost entirely. However, if you sit quite close, the levels can be significant enough that you should be careful.

How To Reduce Radiation From An iMac

I won’t go into too much detail in this article, because I already have a great post on reducing radiation from computers you can check out. However, there are a few simple steps you can take that will really help lower your exposure.

This is absolutely the best way to reduce your radiation exposure, whether it’s your iMac or just about anything else. If you’ve read other posts on EMF Academy, you’ve probably encountered me talking about the Inverse Square Law of Physics. Essentially this law states that as we double our distance from any source of EMF radiation, we quarter our exposure to it.

So, even moving just a few inches or a foot back from your iMac will dramatically lower your exposure levels, which is why the levels were so much lower in my own tests I talked about above.

Scoot the iMac back a bit, and your keyboard closer to you, this will really help a ton.

The next best thing you can do is to hardwire your iMac instead of using the WiFI. This, combined with not using Bluetooth devices, will all but eliminate your exposure to radio frequency radiation from the unit. Just run a simple ethernet cable from the router in your home or office into the ethernet port of your iMac.

This isn’t really something we talked about in this post because it isn’t directly tied to the EMF radiation emitted from your laptop. However, if you use your computer extensively, you should really look into using a simple pair of blue light blocking glasses that filter out the dangerous UV rays and blue light.

Overall, iMac’s do emit a fairly large amount of EMF radiation, primarily magnetic field radiation. If you get an EMF meter, you’ll see just how high these readings are. In fact, holding my Trifield 2 directly against the unit maxed out the readings (they max out at 100 mG).

However, just like any computer, if you simply increase your distance, and use hardwire internet instead of WiFi, your exposure levels shouldn’t be enormously high and you should be perfectly safe.

I hope you found this article helpful if you did, consider sharing!

I created and currently manage EMF Academy, one of the premier sources for EMF safety knowledge. I am so passionate about spreading this crucial information. If you need anything, just shoot me an email at [email protected] and I'll do everything I can to help.

Owlet Radiation – Should You Be Worried?

Smart Meter Shields – What To Buy, and DIY

WiFi Towers – What They Are and How...

And this is my family. For the past 6 years or so I’ve put a lot of time into researching EMF Radiation and why it’s so dangerous. I wanted to do what I could to protect myself and my family from this danger. This blog started as a simple way for me to share what I learned with the world. Now it is one of the largest and most trusted sources to learn about EMF radiation.

Let’s Get To Know Eachother

Even if you don't win, you'll be automatically re-entered each month!